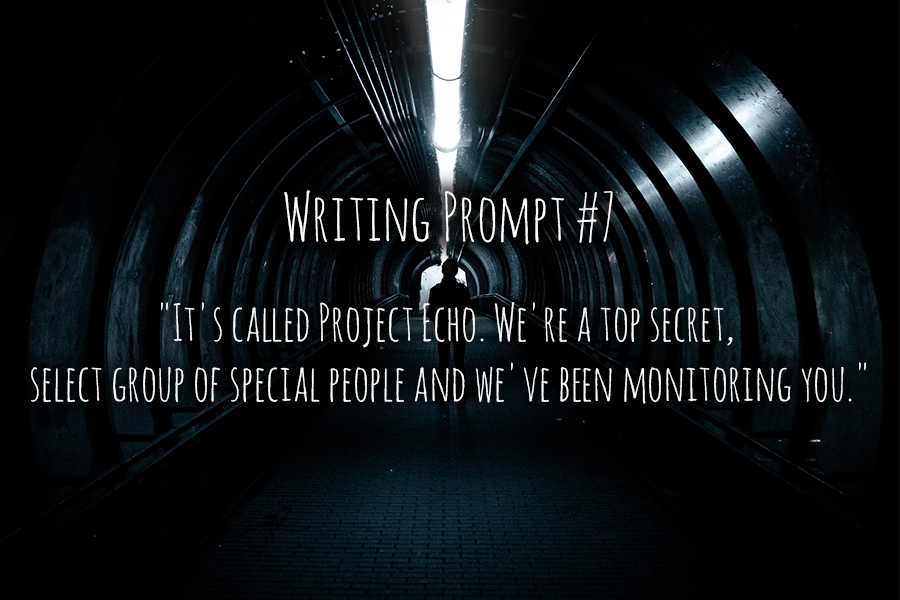 I had noticed that his dark hands were black with what looked like dirt and a damp earthy smell lingered in the air.

I could distinctly remember the feel of the table under my fingertips, the oak bar table was tacky like glue or drying fingernail polish. Who was this man and why had he been watching me?

The past week I had woken with a fresh bruise every day, my skin was now littered in black and blue and one morning I had even found dark crusting blood under my nails that didn’t seem to be mine. I had to admit, I was concerned.

That’s why I had stayed to listen to the man who’d so rudely interrupted my all too familiar solitary drinking session.

“Wait. What? Project Echo? Are you on something?”

“Can I show you something?”

To this day I don’t know why I was so trusting, why I decided it was a good idea to let him lead me outside into the rain and the dark. Some part of me must have wanted to follow this white rabbit.

“If you’re going to try and murder me behind this god awful pub then I’m going to be most displeased.”

That’s when he laughed.

“You have no memory of the last week or so do you?”

I shook my head with a velocity that only half represented my worry.

“Relax. Let me remind you.”

He stepped closer and I took a step back, holding out a finger at arm’s length. I had no clue what drug this man had slipped me to forget the past week or what he had done to me for me to become so bruised but I didn’t want it to happen again.

He stopped and held his hands up.

I lost my footing as my vision became blurry.

I didn’t remember the fall, I had already passed out on the way down.

I woke in a dark chamber. Groggy and confused I tried to sit up but a strong pair of arms pushed me back down and whispered in my ear.

“Don’t move just yet. You hit your head when you fell down.”

“What are you doing to me?”

My voice was foreign to me, strained and croaky.

“You just need to relax. It will be over soon.”

The man held my arm down as he injected a dark blue liquid into the vein, the effects kicking in almost instantaneously as my eyes became heavy with fatigue.

I couldn’t remember if my heart had been pumping this hard before the injection or whether the liquid was forcing itself around my body at an accelerated rate, doing goodness knows what to my body. Why was he drugging me? What was the liquid?

My body convulsed and my world was amass of pain. A thousand knives pierced my skin from the inside out, each bone in my body snapping and crunching with every movement. I watched myself from above my body, listened as I cried. I felt no pain here in the ether.

Shoved back into my body with the force of a speeding bus, I woke up gasping for air and feeling for anything stable to hold onto as the room stopped spinning.

The man was lying on the ground as if he had been thrown from the table, looking up at me with accomplished eyes.

“Welcome back to the world.”

“What have you done to me?” I growled.

Standing, the man brushed down his clothes.

“A week ago the Barron killed you. I bought you back and today I finally perfected the serum that will keep you alive.”

“The Barron? I …died? So what am I? The modern day Frankenstein’s monster?”

I stared him down. This was utterly unbelievable. I must have been in a nightmare about to wake up.

I pinched myself but was still sat on the cold metal table in this dark chamber. I didn’t even know where I was.

“Did you say there were others?” I asked.

He offered a hand for me to take but I ignored it and carefully climbed down off the operating table unassisted and followed him down the corridor.

“You have special genes. That’s how this was able to work. Others have this anomaly also and we have pushed for those genes to emerge. Some call them mutants, I call them gods.”

What had I become?

“And the Barron? You said he killed me. Why don’t I remember this?”

“He was my first accomplishment but also my first failure. He broke out of his containment cell and ran wild, unfortunately, he saw that we had been watching you so you got caught in the crossfire.”

He paused to think.

“As for your memory, death does strange things to the mind. Maybe your death induced some form of amnesia to shelter your brain from the trauma. I will add it to your notes.”

We came to a solid door with a coded lock on the outside. Casually typing in the code he pushed open the door and let me in in front of him.

“Welcome to your new home.”

That’s when he closed the door behind me and all was dark again until the electronic lights fired up and I saw that I had been thrown into a cramped 6 foot squared room with nothing in but a toilet and a bed.

I had become his prisoner.

If we are to truly excel at life then we must learn to assess our surroundings and implement relevant change to inspire development, it's this observational view on the world which allows us to make controlled decisions which opens up the doors to new business ideas.
Tonight I made @witters69 and myself a chicken and mushroom in a white wine sauce and it was glorious ✨
Imposter syndrome is awful.
Today is Blue Monday 💙
Happy Anniversary to this wonderful man! I love you to the moon and back ❤️
As the world eagerly awaits to move again, don't let its standstill make you stand still 🌍 keep moving and success will find you.
%d bloggers like this: