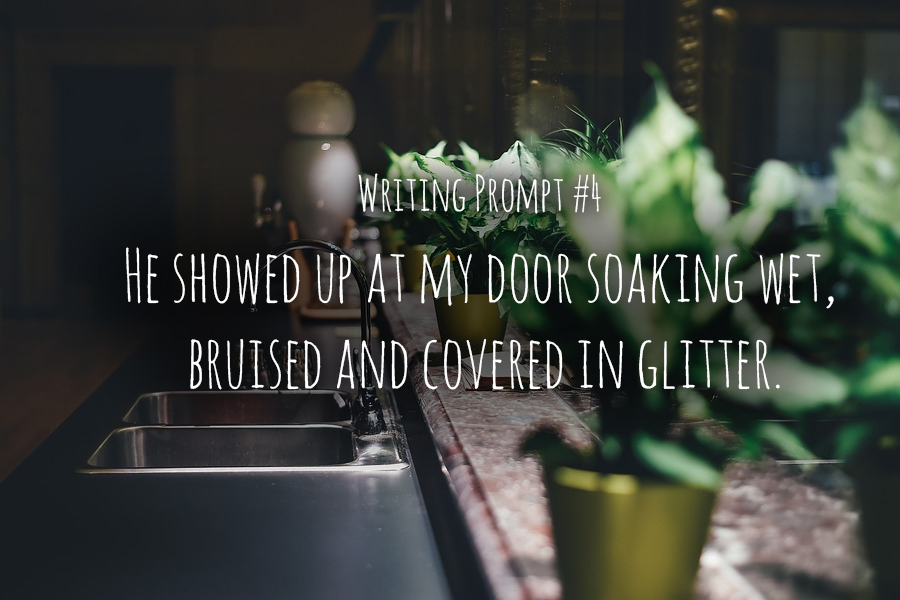 He showed up at my door soaking wet, bruised and covered in glitter. I would love to have said this was a surprise but Vince always thought to come to me when he was in trouble. I suspected the worst, maybe some kind of rave party gone wrong? I suppose that him thinking of me above anyone else was a nice gesture, we had a bizarre friendship in that respect.

The bruises were a shock. His shoulder was bare as if someone had ripped off his sleeve, although one could never determine whether his clothing decisions were a style choice or an accident, and the exposed skin was covered in large oval bruises that looked oddly like fingerprints. His face was untouched, other than by glitter which shone under the porch light. Vince wasn’t a violent person which led me to believe that he’d hurt himself in another way, one that didn’t involve a punch up outside of a club.

I sighed and opened the door a little wider. There were no words from either of us, neither one of us knowing what to say.

Vince shuffled past me, his eyes low like he knew he’d done something wrong.

I’d lost track of time writing for the magazine. Deadlines had been looming over me for weeks and only now I’d taken a break to answer the door and look over at the clock.

2.34am. Wow, I wonder how long someone could last without sleep, I hadn’t slept properly in what felt like forever. Suppressing a yawn I closed the door and wandered into the kitchen to put on the kettle. Ever the English rose, if anything were to help, it would be tea. Tea was the cure for everything, a broken heart, shock and an icy winter’s morning.

Eventually, when Vince was cupping his hot soothing beverage I finally felt it necessary to ask him what had happened. There was something about his eyes, they were dull, his pupils wide and dilated, like he’d taken a pill. He wasn’t Vince, or at least, not the Vince I knew. This Vince was quietly introverted as if he were thinking. Not that Vince didn’t think but he tended to think and speak at the same time, which often got him into trouble.

“Why are you covered in glitter and bruises? And why are you wet?” I stopped myself at two questions, not wanting to overly pry into his business.

He stared into the cup like he was about to dive in. Instead, he took a sip, wincing at the temperature as the water burnt his tongue. This seemed to snap him back to life as he realised where he was.

“You showed up at my doorstep. What happened tonight?”

He leaned back in the chair, relaxing almost.

“Don’t be vague. Do I need to be worried about you?” I sipped my own tea, feeling the healing properties slide down my throat as my worries faded away.

Vince’s face fell and his skin turned pale as paper.

I knew that face well, shooting to my feet as I pulled him over to the sink.

“Not in my kitchen!”

He just made it in time before he emptied the contents of his stomach into the kitchen sink.

Groaning, he stood upright, letting me feel his forehead. He was burning up.

“Come on Vince, you need to sleep whatever this is off. I think I have some of your clothes from last time you stayed.”

Mumbling he let me lead him to the bathroom as I helped him undress and into the fresh clothes I’d washed for him and had been meaning to return. Strangely seeing my best friend’s body was not weird or awkward, instead, luckily for him, I had been overcome with a strong desire to look after this man who needed my help.

I washed his face with a cool damp flannel as I sat him down on the edge of my bed, just within sight of my laptop. I had settled for not sleeping tonight anyway so I could get some writing done while Vince slept off his high.

“Thank you, Harriet.” He mumbled, his eyes closing as he leaned against the headboard.

“I just wish you’d visit when you weren’t in trouble.” I sighed, dabbing his forehead as he slept.
*

A/N This was a development of characters I’d previously written about in my first piece of work on Wattpad: “Fearless Heart”. If you fancy a read check it out here: https://www.wattpad.com/story/72956762-fearless-heart-editing

For more short stories follow this blog as every Sunday is writing prompt Sunday in which I create a short piece based on a prompt.

If we are to truly excel at life then we must learn to assess our surroundings and implement relevant change to inspire development, it's this observational view on the world which allows us to make controlled decisions which opens up the doors to new business ideas.
Tonight I made @witters69 and myself a chicken and mushroom in a white wine sauce and it was glorious ✨
Imposter syndrome is awful.
Today is Blue Monday 💙
Happy Anniversary to this wonderful man! I love you to the moon and back ❤️
As the world eagerly awaits to move again, don't let its standstill make you stand still 🌍 keep moving and success will find you.
%d bloggers like this: